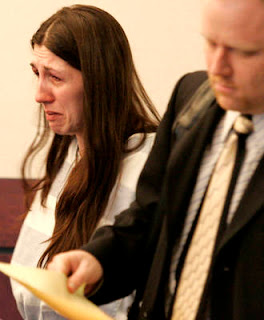 The De Soto, KS mother who starved her 6 year old Down Syndrome child nearly to death has been sentenced to the maximum 8 and a half years in prison. The 27 year old mother of 4 was arrested last year on outstanding traffic warrants. She told authorities at time of arrest that she didn't have the boy, but police returned to her house later that day at the persuading of a family member and discovered the boy. He was locked in the attic, nearly starved to death and covered in his own shit.

The judge, Peter Ruddick, quickly sentenced Rachel Perez to the maximum 102 months in prison. He could find no mitigating circumstances that would justify a lighter sentence even stating that 8 1/2 years "was not a terribly long sentence for what she did to her son". A tearful Perez had just asked the judge for leniency stating that she didn't mean to harm her son, but was afraid authorities would take the child.

What might be even adder is that this woman has three other children, including one she gave birth to in jail. All four are currently in foster care. I'm sure they all have bright futures with trash like this for a mother. Also, I would like to know where the father of these children is? More likely fathers - they share some responsibility too.
at 2:46 PM