Royals Back in Action After Sweeping Twins 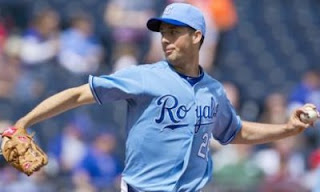 After losing six straight, many felt that the Royals' annual collapse had begun. However, Kansas City rebounded in a big way by sweeping the Minnesota Twins, a team the Royals struggle against every season. Kansas City is back in action tonight against Baltimore.

Tonight's game features two struggling pitchers. Jeff Francis survived only three innings in his latest outing, and has pitched poorly after a strong start to the season. The Royals need him to get back on track; while the Royals' offense has been redhot, its starting pitching has been suspect all season. Francis has a great opportunity to turn it around tonight, facing winless Brad Bergensen.
The Royals' sweep of the Twins got Kansas City back above .500 (the club currently sits at 15-13 for the season) and gave the team a much-needed boost of confidence. The Orioles are average at best, and Kansas City has a great opportunity to continue its hot streak and gain some ground on the red hot Cleveland Indians.
at 4:33 PM