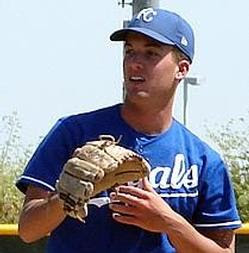 The Royals dropped a wild 9-8 game to the Cardinals, losing the 1-70 series and falling to 22-24 overall. The loss moves Kansas City to eight games back of Cleveland in the AL Central.

The Royals pitching yesterday was downright terrible at times, as Kansas City walked 13 batters. However, St. Louis was called for only walk, which upset catcher Matt Treanor and manager Ned Yost so much that they both were ejected during the seventh inning. Kansas City had fallen behind by as much as six runs, but was able to battle back and tie up the game before eventually losing in extra innings. Kansas City's poor pitching and defense (the team's streak of 11 games without an error was broking) wasted a terrific offensive effort from the Royals, as Alex Gordon, Wilson Betemit and Jeff Francoeur all homered during the comeback.

The Royals have an opportunity to get a once promising season back on track in its next series against Baltimore. Danny Duffy has showed some promise, and he will get the start tonight against the Orioles.
at 12:50 PM