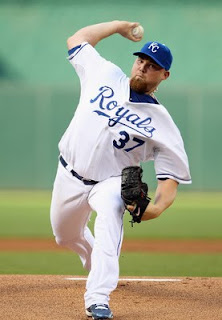 The Royals' offense was flying high, and fireworks Friday at the K seemed like a good omen that Kansas City's bats would remain hot. However, Gio Gonzalez had other ideas. The young lefty baffled the Royals all night, and Kansas City fell to Oakland 3-2.

Kansas City wasted a great effort from Sean O'Sullivan, who only gave up three runs in eight innings of work. O'Sullivan gave up all of his runs in the deciding fifth inning, but otherwise was just as good as Gonzalez.

Eric Hosmer made his much anticipated debut to mixed results. He drew two walks and stole a base early, but ended up striking out in his final two plate appearances. Hosmer, who led the minor leagues in hitting, likely needs some time to adjust to major league pitching - and he should eventually provide Kansas City's offense with a boost.

The loss dropped Kansas City to 17-15 on the season, and the Royals currently sit alone in second place in the AL Central - five games behind the surprising Cleveland Indians.