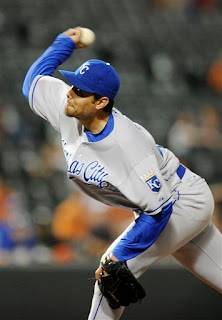 Kansas City fell to Baltimore 5-3 last night, and has now lost 8 of its last 10 games. Royals closer Joakim Soria continued to struggle and gave up a two run walkoff homerun to Adam Jones.

Kansas City appeared to be in position to win the game, entering the ninth inning with a 3-2 lead. However, Soria quickly gave up two doubles which allowed Baltimore to tie the game. He then delivered a fastball that Jones, who hadn't hit a homer in over a month, blasted into the bleachers to send Kansas City on its way to another late inning loss.

Soria's meltdown wasted a solid effort from rookie pitcher Danny Duffy, who was in position to pick up his first major league win before Baltimore's late game heroics. Duffy gave up two runs and five hits in 5 1/3 innings, and has looked good in his first two starts as a Royal. Duffy's emergence could be a big boost for a pitching staff that is struggling, and the fact that he is only 22 years old has to have Kansas City fans excited about the future.

Alex Gordon homered for the second time in two games, and Billy Butler hit an RBI single to give Kansas City its 3-0 lead. The Royals play again tonight at 6:05.
at 10:59 AM