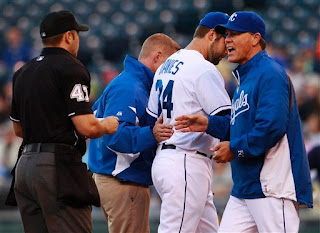 Just when things had started looking up for Kansas City, disaster struck. Vin Mazzaro made major league history in the worst way imaginable - giving up 14 runs in less than three innings - and the Royals were mauled by Cleveland 19-1.

No major league pitcher has given up 14 runs in as few of innings as Mazzaro did, which means he now owns a major league record. His horrible performance also cost him a spot on the team, as the Royals sent him back down to the minors after the debacle was over. It is hard to imagine that Mazzaro - who know boasts a 22.74 ERA - will get another major league shot anytime soon.

As bad as Mazzaro was, the Royals coaching staff has to shoulder some blame here. One has to wonder what on earth they were thinking while they stood there and watched the young pitcher get absolutely shelled. Was it to send a message? Did they hope to kill as much of his confidence as they could? The guy gave up ten runs in the fourth inning, so naturally we should bring him back out for the fifth, right?

It is nights like last night and coaching decisions such as leaving in a guy getting tormented that make the Kansas City Royals what they are. Just baffling.
at 4:04 PM