Royals Loss to Yankees Shows How Far Team has to Go 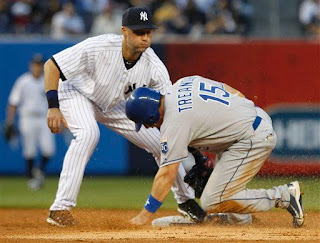 The Royals you were expecting this year have surfaced, as Kansas City has regressed back to its 2010 season form. Last night's 3-1 loss to the Yankees was a bad trip down memory lane for Royals fans, and it appears as if this year's magic may be slowly wearing off.

On paper, a two run loss to a dangerous Yankee team doesn't appear that bad. However, it was the way Kansas City lost that was so cringeworthy. Every inning, it seemed that the Royals put men in scoring position and failed to manufacture runs. Melky Cabrera provided Kansas City with its only run, a solo shot in the fourth inning. The bottom of Kansas City's order is what will ultimately hold this team back, proven last night when the Royals 7 through 9 hitters constantly left players on base.

The Royals also made several head-scratching plays that showed this club still has a long way to go. Matt Treanor got picked off in a horrible steal attempt, and Chris Getz was easily thrown out trying to reach second base off a pitch that hit the dirt.

The Royals also announced yesterday that starter Bruce Chen will be placed on the 15 day DL due to a sore side. Kansas City will call up Vin Mazzaro from Omaha to take his place. This could be a big blow as Chen has been the rotation's most consistent pitcher this year. The Royals are still above .500, but the team has a lot of work to do and obstacles to overcome if they want to keep the cinderella story going.
at 12:26 PM