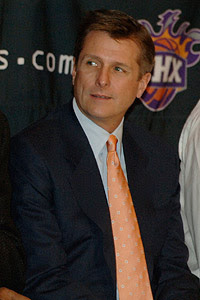 Phoenix Suns president and CEO Rick Welts has revealed to the public that he is gay. Welts hopes that by coming out, he will help the NBA address a topic it has had trouble approaching in the past.

Welts' admission wasn't much of a surprise to Suns guard Steve Nash, NBA commissioner David Stern, or Phoenix coach Alvin Gentry, who all had ideas about Welts' sexuality but reaffirmed their support for the Suns executive. Welts hopes that by admitting he is gay, he can help breach a wall that has seperated homosexuality and sports.

Welts' revelation may have opened the door for other athletes to address their sexuality. ESPN now has a feature on former Villanova guard Will Sheridan, who also has admitted that he is gay. Other athletes may address the topic in the future after the general positive reception both Welts and Sheridan have received for their bravery.
at 2:00 PM