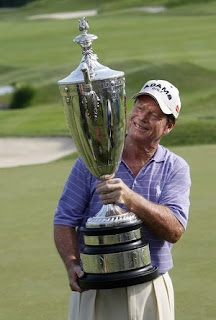 Tom Watson became the oldest winner of a Champion's Tour major over the weekend when he took home the Senior PGA Championship trophy. Watson and David Egar were neck and neck all day in the final round at Valhalla Golf Club in Louisville. Both had a chance to win it on the 18th Green only to finish tied. Watson won with a birdie on the first playoff hole.

The victory gives Watson six major victories on his Champion's Tour career - the record is eight held by Jack Nicklaus. He won 8 majors on the regular PGA Tour.

At 61, Watson shows no signs of slowing down. This July he will play in the British Open, The Senior British, and the Senior US Open. He feels as if he's living on borrowed time at his age and wants to get in all the tournaments he can.

How about that trophy? You have to question the wisdom of awarding a trophy that large to a senior player. Does it come with a PGA logoed truss?
at 11:17 AM