Where Do Chiefs Players Land in the NFL Top 100 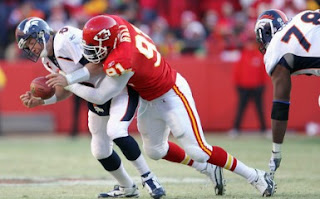 The NFL has announced its top 100 going into 2011, and the list includes several Chiefs players. Kansas City has a total of five players on the list, which is tied for fifth most in the NFL. There are two teams in the league that do not have any players on the list.

There are several picks that make sense, most notably Eric Berry being listed at 93. Berry showed a lot of promise as a rookie, and should be even better next season. Guard Brian Waters checks in at 67, which seems about right for the reliable offensive lineman.

There has been some controversy with Tamba Hali's ranking, as most Chief fans felt he should be much higher on the list. Hali came in at number 64, a ranking that seems a bit low considering he is one of the best pass rushers in the league. Despite registering 14.5 sacks last year for a division winner, the Chiefs' pass rush specialist continues to fly under the radar. Hopefully another monster year will result in Hali getting the recognition he deserves.

Jamaal Charles and Dwayne Bowe are the other two Chiefs players who will be listed in the higher rankings.
at 7:00 AM