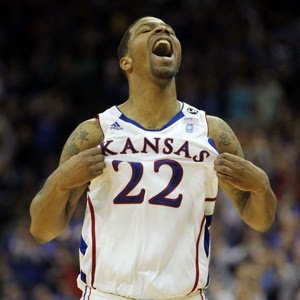 The 2011 NBA Draft is upon us, which means we will several local players fulfill their basketball dreams as well as a few hilarious outfits. The draft will begin at 6:00 p.m. and will be broadcast on ESPN and ESPN 3.

Several local players are expected to be drafted in the first round, most notable Kansas' Marcus and Markieff Morris. Most draft experts expect Marcus to go somewhere around tenth in the first round, while Markieff will likely be selected a few spots later. Milwalkee and Golden State have been listed as two likely destinations for Marcus. The Morris' one-and-done teammate from last season, Josh Selby, will likely be a late-first rounder at best. Most projections include Selby going in the second round.

Colorado guard and Kansas City native Alec Burks will also likely be an early selection, and could possibly be the first true shooting guard selected. Burks lacks a consistent outside shot, however his ability to drive and finish at the rim could be a big boost for an NBA team that needs to add some size and scoring to its guard rotation.

Two other Big 12 players will likely be drafted in the first round, and both played for Texas last season. Wing Jordan Hamilton and forward Tristan Thompson could both be top-15 picks, as Thompson's draft stock has risen steadily since he earned strong reviews in pre-draft workouts.

Overall, this is arguably the weakest NBA draft since 2000. The weak talent pool means that the former Big 12 stars listed earlier will all be guaranteed a decent draft position and starting salary, as well as an opportunity to see early playing time in the league.
at 12:07 PM