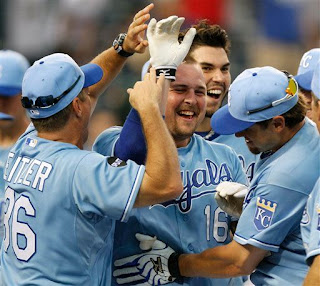 Billy Butler hit his first walk off home run to give Kansas City a 2-0 win over the Los Angeles Angels. The victory gave Kansas City a much-needed series win, and improved the Royals' record to 25-30 on the season.

Butler's ninth inning blast was originally ruled a double, as the ball bounced off some padding past the outfield wall and landed back in play. Officials later correctly ruled that Butler had hit a home run after watching a video replay of the at bat.

While Butler won the game with his homer, the Royals' Alcides Escobar kept Kansas City in the game with a tremendous defensive play in the eighth. Los Angeles loaded the bases, and former Royal Alberto Callaspo hit a hard grounder that appeared out of Escobar's reach. However, the shortstop not only made the stop but threw Callaspo out at first, preventing the Angels from scoring and keeping Kansas City in the game. Escobar has been brutal at the plate this season, but his defense has earned him a spot in Kansas City's starting lineup.

While Butler and Escobar made the big plays, Kansas City's pitching staff deserves most of the credit. Since being aquired from the Colorado Rockies, Felipe Paulino has pitched extremely well. He only gave up four singles in five scorless innings yesterday, and has yet to give up a run as a Royal. Kansas City's pullpen finished off what Paulino started, and Tim Collins picked up the win.
at 12:22 PM