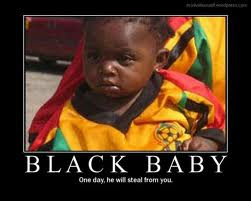 Twelve States and DC now have white populations below 50 percent in children 5 and under, that's up from six on the 2000 census. At the current rate, 7 more states will have a white minority under 5 at the next census (in 10 years).

Our only hope as a nation is that minorities, and blacks specifically reverse their current attitudes as absentee fathers, and lazy entitlement culture that plagues the American Ghettos. God help us.
at 2:25 PM

Did you also notice the higher increase in the Two or More Races section. I wonder if this has anything to do with your beautiful blue eyed women LOVING the dark and choclate. Your a racist, but your daughter's not.

That's ok comment number 4:14, the only white women that date the "dark and chocolate" or "dark and smelly" are the trashy and stupid white women, so we don't mind losing them to you idiots.

When are you minority IDIOTS going to understand that simply reporting the facts as they are is not RACIST. Quit using that fucking word, think of a new excuse to be motivated to overthrow the white people. Dumb minority fucks.

Like I've commented before on this blog site, it is a better situation for black females to be single parents. They collect more money from the taxpayers in welfare and most importantly to them, they don't have to work. The black females probably don't put up much of a fight when the black males just want to get them pregnant and then go back to hustling, shuckin' and jivin'. The more black babies the black females pop out, the more welfare they get. It's a win, win for them. Got to love the Democrats!

hey, I'm black and even I'm tired of everyone calling everything "racist". If you are telling the truth about something, or describing a situation in all honesty, and race happens to be part of the facts, then it is not racist. We as a people need to quit making excuses for being failures and stop blaming white people for all of our problems. Only then will we be able to own up to our own shortcomings and remedy them to become successful. Even if you hate white people (which most black people do), then remember this: success is the greatest form of revenge.

It is a sticky situation, but the fact is that we can't just have dead babies laying around all over the place. If people are stupid enough to have children when they have no means of supporting them, we're just going to have to take care of them. Unless you see another way around it.

How is this comment not racist? "Our only hope as a nation is that minorities, and blacks specifically reverse their current attitudes as absentee fathers, and lazy entitlement culture "
Come on! Be racist but don't be an idiot.

12:02 - Are you suggesting that these attitudes I describe are not the biggest problem in the inner city black community? Or can one be "racist" and correct at the same time? If not, then what are the biggest factors leading to the murder rate and general decay found there? And I realize it's complicated, but a strong family setting will take care of many of the other problems - education, etc.

Gonna have to agree with comment 10:15, if it's true then it is just a statement of fact. If race happens to be involved, that is just part of the story and being a minority myself I don't believe that this was a racist post. Just sayin.

"Black Baby: One day, he will steal from you" IS RACIST, as is the author of this article.

Ah, if only you could spell, you would have a good job. Go fuck yourself chocolate stink ass.

Well, the photo is definitely racist. But the article is not, it's speaks the truth that people are just afraid to say because every moron on the planet knows how to yell "RACIST" and get attention now. Whether they got past the 8th grade or not. Yelling "Racist" is just a safety word for when someone with low intelligence doesn't know how to analyze the real problem at hand. Don't worry though, minority sympathizers, the Democrats will hold the office for four more years of welfare and entitlement. Come on Welfare!

Well folks, once again the spelling and grammar say it all. Cynkara, you are a complete moron. Now get in the back and check on my hamburger, and don't forget the extra cheese.

What kind of name is Cynkara? You might as well be named "Bush Baby", and not after the great President, but after the thing that grows in the ground.