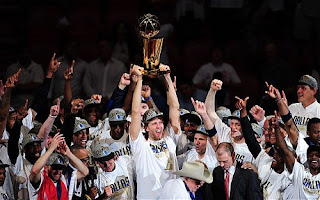 The Dallas Mavericks defeated the Miami Heat in game six of the 2011 NBA Finals, 105-95. The win gave Dallas its first title in franchise history, and gave future hall of famers Dirk Nowitzki and Jason Kidd their first championship rings. Miami's Lebron James, hailed by many as the best player in the league, will have to continue his search for a title next season.

All season long, Miami has been the target of criticism, mostly from Lebron James' announcement that he was leaving Cleveland for Miami to how the team was constructed. With the finals over, most of the media again are turning their attention to James, Dwyane Wade and the Heat rather than giving the Mavs their due. Despite the talent on the Heat, Dallas was simply the better team this series. Nowitzki played better than any other player on the court, and his supporting cast gave him all the help he needed to pull off the upset. Give Dallas the credit it has earned - the Mavericks stood toe to toe with the most hyped NBA team in the league's history and played better basketball.

Despite the way the Finals ended, the Heat have to be the favorites to win the title next season. James and Wade are both superstars, and Miami got a big boost in the finals from young guard Mario Chalmers. If Miami can add another asset or two and continue to gel as a team, there is no reason why they can't win several titles in the future. The team got two wins away from the championship this season, and one would think they will be even better next year with more experience playing together.

While the future may belong to Miami, the title this season belongs to Dallas. The Mavs erased a bitter finals defeat to the Heat in 2006 and took down the biggest NBA's most dispised team. A fitting end to a wild and exciting NBA season.
at 12:25 PM