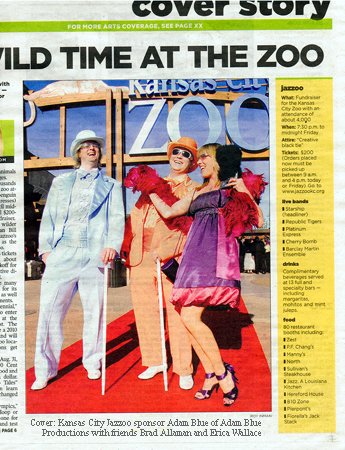 Jazzoo 2011, Kansas City's largest charity event, gets underway at 6:30pm Friday night.  Jazzoo 2011 tickets are still on sale and range in price from $175.00 for an individual ticket all the way up to $15,000.00 for a group donation package.  We opted this year for the corporate package and will be sponsoring The Kansas City Zoo for the 4th year in a row.  We have requested that our donation go toward the Panther cage as that cage is the most pathetic cage in the entire zoo, (although we know that we cannot "direct" our donation dollars, we joke about this situation with the FOTZ every year - sometimes over the microphone on the main stage).


Entertainment for Jazzoo 2011 will feature local 80's tribute band The Zeros, who have requested their own stage this year to separate their fans from the old folks who typically stay near the main stage.  We interviewed "Shawn Zero", The Zeros band leader and he remarked about last year's Jazzoo problems with The Zeros sharing the main stage with elder band ELO.  "Yeah, we opened up for ELO, or whatever they are calling themselves, they weren't even the real ELO, more like an ELO tribute band with most of the original members long gone [notably the band's founder, main songwriter and lead singer Jeff Lynne] and they were bitchin' at us about our stage show.  We had our light boxes on the stage for the hot girls to dance on and they were backstage throwing a fit about it.  The manager was yelling at us trying to get us to get the girls off the stage but we were like 'hey man, this is part of our show, you old fuckers are just going to have to deal with it'."  So this year, The Zeros were given their very own stage.  The entertainment on the old folks stage for Jazzoo 2011 will feature The Little River Band and The Rainmakers.

Jazzoo 2011 will once again feature a wide array of Kansas City cuisine, represented by over 50 Kansas City restaurants including The Oak Room Intercontinental, The Skies Restaurant, and one of our favorite plaza fine dining restaurants Fogo De Chao.  It will be a hot one out there so dress appropriately.  Dress at Jazzoo is notoriously referred to as Creative Black Tie, you are supposed to improvise on some form of tuxedo or formal wear.  You will definitely see some strange get-ups at Jazzoo 2011, and some of them will probably be us.  See you all there!
at 10:15 PM