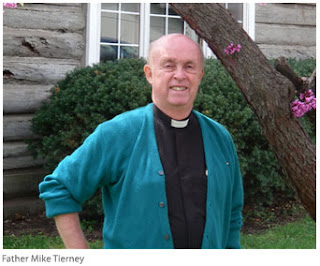 Thursday night Bishop Finn of the Kansas City-St Joseph Diocese of the Catholic Church removed Father Michael Tierney from his position as pastor at Christ the King Church in Waldo. The Bishop cited allegations from Credible sources that Tierney was involved in sexual misconduct. The alleged misconduct occurred in the 70's and 80's. According to Finn, Father Tierney denies the allegations, but has been cooperating fully.

Tierney's "Pastor's page" has been removed from Christ the King's website, but according to a cached version, he has been at Christ the King since January of 2010. A Kansas City native, he attended St Peter's Elementary School, and bounced around from church to church in his priest career, all of which has been spent in the Kansas City-St Joseph Diocese.

All of this comes on the heels of Father Shawn Ratigan being charged with child pornography. Interestingly, Tierney spent 4 and a half years at St Patrick's Church in the Northland in the late 70's - the time of the alleged misconduct. This is the same church that Ratigan worked at when he was accused of child pornography. It seems the Kansas City-St Joseph Diocese has decided it's time to come clean with all the dirty priests now. I wonder how many more of these perverts the Bishop knows about.
at 11:44 AM