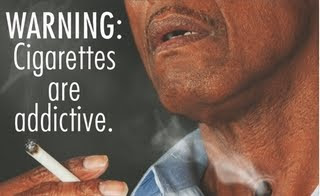 The FDA has released their new Cigarette Warning label pictures to the public. Nine pictures were chosen for their graphic images and shock value. The new images will cover the top half of a package of cigarettes beginning in the Fall of 2012, leaving only the bottom portion of the package for brand labeling. The new labels are part of 2009's Family Smoking Prevention and Tobacco Control Act.

The photos are graphic depictions of dead bodies, people with severe health problems, and my personal favorite (shown above), the smoke billowing out of the tracheotomy hole in the neck! The pictures are designed to get people to quit and more importantly stop young people from starting. As a catalyst to getting the smoker to quit, this is an absolute waste of money, as Denis Leary once said, "you could brand the smokes 'tumors' and put a skull and crossbones on the package and people would still buy them".

A bigger problem is probably the legality and the cost of this. This is a great example of government overstepping it's bounds. The Tobacco companies will surely fight this. Their contention is that having their brand labeling only on the bottom of the pack would keep customers from seeing the brand. They have a good point. All cigarette racks in the country cover the bottom part of the package. Brands would be impossible to distinguish from one another without major changes in display racks.

Either way, the real winners in this deal are the litigation attorneys as more tax dollars are pissed away.