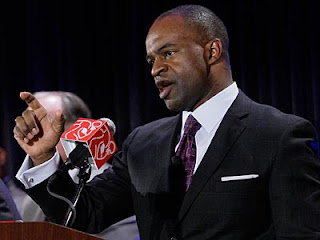 After the last discussions between NFL owners and players took a step backwards, talks have reportedly resumed. NFL commissioner Roger Goodell, NFL Players Association head DeMaurice Smith have been joined by several owners and players in hopes of ending the lockout.

The group will be meeting at a law firm located in Minneapolis. Some of the more well-known participants include Colts center Jeff Saturday and Giants owner John Mara. These will be the fifth set of "secret" talks between the owners and players. The talks are only scheduled to take place today, but could also extend into Friday if both groups feel it is neccessary.

While reports on how much progress the players and owners have made varies, both sides appear to be running out of time to get something done. Training camps are scheduled to open in three weeks, and the Hall of Fame Game is August 7.
at 10:43 AM