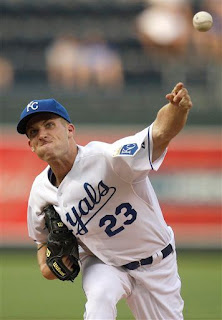 Kansas City's comeback effort came up just short, as the Royals lost a back-and-forth slugfest to the Blue Jays, 9-8. Despite three run home runs from Melky Cabrera and Billy Butler, Kansas City was undone by poor pitching. The loss dropped the Royals to 26-36 for the season, nine games behind Cleveland in the AL Central standings.

Early on, it appeared that Kansas City was in a good position to pick up the win. After falling behind 2-0 early, Cabrera blasted a three run shot to give the Royals a 4-2 lead. That lead would disappear quickly, however, as Jayson Nix hit a three run home run of his own to give Toronto the lead. The Blue Jays then seemingly put the game out of reach in the sixth inning, as Adam Lind hit a grand slam to give Toronto a 9-4 lead.

The Royals wouldn't quit, and made an impressive late charge to get back in the game. Butler's three run homer in eighth cut the lead to two runs, and Alex Gordon doubled in the ninth to make it a one run game.

It is a shame that such an impressive offensive performance came in a losing effort. The Royals get another shot at Toronto this afternoon. Luke Hochevar, who has really struggled over the last couple of games, will get the start for Kansas City.
at 2:37 PM