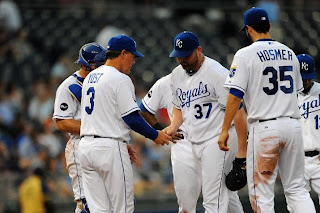 Fresh off a dramatic walk-off win over the Angels, the Royals fell flat on their faces last night. Kansas City got embarrassed by the Twins, 8-2, as starting pitcher Sean O'Sullivan continued to struggle.

I'm not sure if it is possible for anyone to pitch as poorly as Sullivan has recently. He gave up five home runs in less than three innings of work last night, and he has struggled all season long. It is time for Kansas City to explore other options and to cut ties with Sullivan. He has proven he doesn't have what it takes to make it in the big leagues, and Kansas City has plenty of prospects ready for a shot.

The lone bright spot for Kansas City was Jeff Francoeur, who had a big day at the plate. Francoeur hit two doubles and a triple, and was responsible for batting in both of the Royals' runs. Francoeur now leads the team with 32 RBI, and continues to be a pleasant surprise for the team. Joakim Soria, in his first appearance since losing his closer role, retired all six batters he faced.