Royals Win Game One of the 1-70 Series 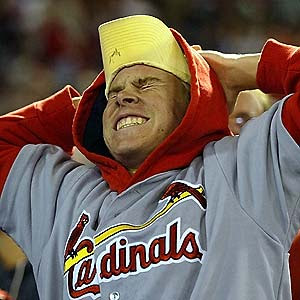 The Royals held on to beat the St. Louis Cardinals, 5-4 in the first game of the annually-hyped 1-70 series. Alcides Escobar continued to stay hot at the plate, contributing two hits and a run for Kansas City. Escobar is now 14 of 24 from the plate over the past seven games, with eight runs scored.
Escobar was also involved in the game's deciding play during the eighth inning. Escobar hit a hard ground ball towards gold-glove first baseman Albert Pujols, however Pujols was unable to make the stop. Mike Moustakas scored the go-ahead run, and Pujols was charged with an error. Pujols had a chance to get revenge on the Royals in the ninth, as he faced closer Joakim Soria with the tying run on first. However, Soria was able to get the out, and Kansas City stole game one of the series.
Kansas City raced out to an early 3-0 lead thanks to RBI hits from Jeff Francoeur and Alex Gordon, only to watch St. Louis roar back and take a 4-3 lead in the third. Game two of the series starts tonight at 6:15 p.m., and Vin Mazzaro will get the start for the Royals.
at 1:04 PM