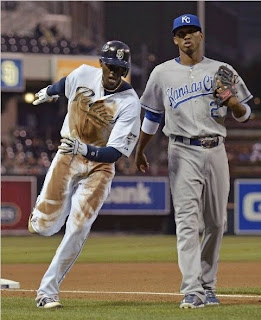 The Royals' series vs. the San Diego Padres got off to a bad start, as Kansas City dropped game one 4-3. Game two didn't go any better, as the Royals once again couldn't get their offense going, losing 4-2.

Kansas City has a disturbing trend this season of allowing struggling players to have a coming out party, and this game was no different. San Diego pitcher Clayton Richard (4-9), who had been winless in his last 12 starts, absolutely shut down Kansas City's offense. Kansas City got solid pitching once again from Felipe Paulino, who has slowly turned into the best pitcher on the Royals' staff. Paulino (0-2) has yet to record a victory for Kansas City, although that can largely be blamed on a lack of run support.

The lone bright spot for Kansas City offensively was Jeff Francoeur, who continues to make the best case for Kansas City's All-Star representative. Francoeur scored the Royals' first run, and hit a solo homerun in the seventh. He also flashed some defensive skill as well, throwing out Anthony Rizzo in the third inning for an outfield assist.

Kansas City wraps up its series with San Diego today at 2:35. Bruce Chen (4-1) will start for Kansas City, making his second appearance since returning from injury.
at 1:17 PM