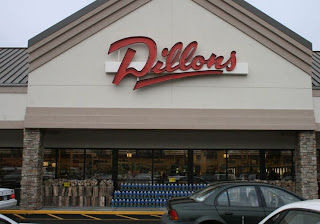 In a colossal display of idiocy, an as of yet unidentified man drove his car through the front doors of a Dillons Grocery store in Topeka. Police were called to the store at 801 NW 25th St, Topeka, at around 9:30PM on Monday to investigate.

Witnesses said the man was shopping in the store, and upon returning to his car noticed it had been damaged by a shopping cart. In a rage, he then picked up the shopping cart and attempted to throw it through the store window. That didn't work, and apparently only enraged this moron enough to drive his car through both sets of doors and come to a stop in front of the Pharmacy counter. The man then drove away and is still at large. Police said they suspect his vehicle sustained substantial damage. No Shit.

Obviously this mental midget was having a bad day, but it was a damn good thing for him that it was a holiday evening and the store was relatively quiet. The fact that there were no injuries will save this guy a lot of time in prison, and they WILL catch him.

This does bring up a good point though. Are you people so fucking lazy that you can't put the shopping cart in the little rack things that the store provides in the parking lot? Come on, have a little respect for other people's property and act like you give a damn! Pricks!
at 11:53 AM