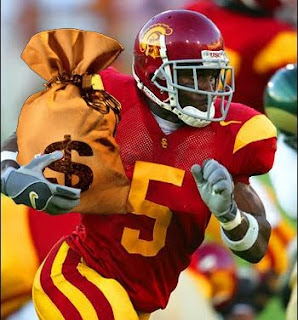 The University of Southern California has been stripped of its 2004 NCAA title in football. While this is one of the most severe penalties that a football team can face, many fans and pundits feel USC ultimately got what it deserved. The record books will now have no BCS champion for the 2004-05 season.

Although the news was expected, USC losing the 2004 title is yet another black eye for college football. This news comes off the heels of the Jim Tressel scandal and resignation at Ohio State, and rumors have been swirling about a scandal involving Cam Newton and Auburn, last year's national champion. The situation feels a bit like the steroid scandals in major league baseball that took place a few years ago - a lot of bad news seemed to surface at the same time and the public learned more and more as time progressed. Fans must now wonder if Auburn will lose its recent title, or if any other championship teams will face a scandal similar to what USC has gone through.

USC lost more than just its national title. The BCS also stripped the Trojans of their 2005-06 season, including the memorable loss in the national title game to Texas. Several years ago, USC was the premier dynasty in college football and in the mix for a national title every year. Now, all the Trojans are left with in the record books is a partial national title from the 2003-04 season. The BCS sent a clear message with the USC ruling: cheaters never win. At least not in their official records.
at 7:35 PM