Who Will Represent the Royals in the 2011 MLB All Star Game? 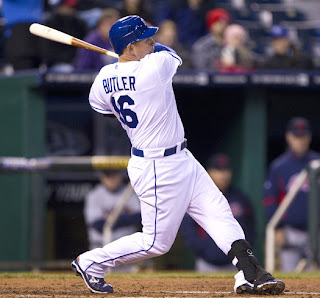 The 2011 MLB All Star game is approaching, and managers will be making their player selections soon. In baseball, each team must have at least one representative in the game, which means Kansas City will be sending someone to Phoenix - we just don't know who that player will be.

Several candidates are being mentioned as a possible representative for the Royals. Many experts feel Billy Butler should be in the All Star game. Butler leads the team with a .303 batting average and a .403 on base percentage. Others feel that Jeff Francoeur is deserving of a bid, and for good reason. Francoeur leads the team in home runs (10) and RBI (46).

Despite the impressive stats of both Butler and Francoeur, Alex Gordon is leading most fan polls in regards to which Kansas City player should earn the big. Gordon leads the Royals in runs and OPS, while hitting a respectable .293. He also narrowly trails Francoeur in home runs with nine. Gordon's well-rounded game certainly make him worth of a bid, but Francoeur seems to be the man to beat at this point.