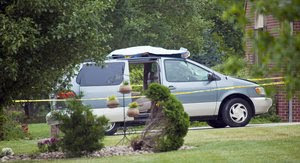 A respected physician at the VA in Wichita was involved in a bizarre hit and run accident on Friday morning. It seems Dr Mohammad Sarrafizadeh hit a 32 year old man who using a weed eater near the street. The impact was severe enough to crush the hood, shatter the windshield and deposit the victim on the roof of the Toyota Sienna that Dr Sarrafizadeh was driving. According to several witnesses, the Doctor then continued driving more than three miles to his home. Police responded to the man's driveway to investigate.

Dr Sarrafizadeh was arrested for leaving the scene of a fatal accident and posted bail. A Google search shows that the Doctor is a 1970 graduate of Tehran University and subsequently moved to the US to start his medical career at a New York Hospital.

It's hard to imagine what was going through this man's mind as he was driving three miles with a corpse on his roof. Maybe he went into shock. Obviously not a stupid man, but something went wrong on Friday morning and it will be interesting to see what happened in this guy's head. Nevertheless, another tragic accident.
at 9:33 AM