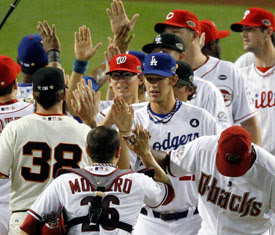 After the AL dominated the All-Star game for 14 years, the NL is finally starting to put a streak of its own together. Prince Fielder hit a three run homer in the fourth, propelling the national league to a 5-1 victory.

Roy Halladay and nine other pitchers combined to keep the potent AL lineup off balance all game. The American League's only run came in the top of the fourth inning, when Adrian Gonzalez hit a solo shot to give the AL a 1-0 lead. However, Fielder's blast only a few moments later gave the NL a lead that was rarely threatened. The NL would pad the lead with runs in the fifth and seventh inning.

The victory gives the NL home field advantage for the world series. However, the bigger story seems to be the list of no-shows on the AL side. Derek Jeter pulled out of the game, citing exhaustion fresh off of reaching 3,000 hits for his career. The AL's pitching was also hit hard, as Justin Verlander, C.C. Sabathia and Felix Hernandez did not play. A total of 16 of the 84 All-Stars did not participate in the festivities.

The All-Star game moves to Kansas City in 2012, and will be the first time the Royals have hosted the mid-summer classic since 1973. The team sent representatives to the 2011 game to help prepare for next year, and will reveal next year's All-Star logo on August 2.
at 9:53 AM