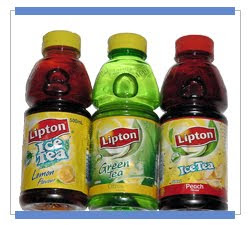 Carole Green sure does like Lipton Iced Tea. Every morning the Bonner Springs resident would drink one on the way to work and throw the empty into Gary Bukaty's yard. Bukaty counts more than 200 times the bottle has been thrown on his property. He was fed up and decided to install a motion capture camera to catch the perpetrator of the heinous crime.

It worked, he spotted chronic litterbug and certified white trash, Carole Green throwing the bottle out her car window. Bukaty took the evidence to the Police. Green plead guilty to four counts of littering and was fined $1000.

Only four counts? Why did the prosecutor not go for more counts? I would assume he had the evidence. This guy had bags of these bottles that she threw on his yard.

Incidentally, the story was even featured on Inside Edition. Maybe she has a future doing advertisements for Lipton.
at 2:36 PM