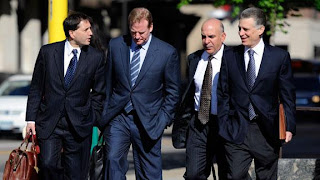 Earlier this week, it appeared that the NFL lockout may soon be coming to an end. While negotiations have continued this week in New York, the 8th curcuit courts recently ruled in favor of the NFL, deeming that the lockout is indeed legal.

The decision came fresh off the news that Roger Goodell and DeMaurice Smith have started a second day of negotiations in New York. The ruling was not a surprise to both the owners and the players, as previous court decisions have often ended the same way regarding cases similar to the 2011 lockout.

While the news caught both the players and owners off guard, the ruling is not expected to be a factor in the present negotiations. Sources say that both parties feel an agreement is close to being reached, although we still do not know when that will be. While an agreement for how the revenue split should be settled appears close, there is still a lot of work to be done in regards to the new free agency rules. Progress is being made, but it appears that a decision is likely a few weeks away.
at 11:11 AM