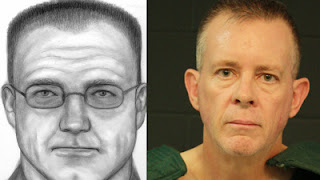 Prosecutors from both Jackson and Cass Counties announced this morning at a joint press conference that they are charging Jeffrey Moreland with murder and rape in connection with several cases that span a number of years. Moreland medically retired from the Grandview, MO Police Department several years ago before any of the alleged crimes took place.

The suspect picked up a woman walking down MO 291 in Harrisonville on June 30. He took her to his home and raped her. Afterward, he gave the woman $100, hit her on the head and told her she was stupid for getting into a car with a stranger. The investigation into her abduction and rape, and the DNA taken from that case, led to the break in the cold case murders from 2008 ands 2010.

Moreland has been charged with the 2008 murder of Cara Jo Roberts. Roberts was found in her bathtub, shot in the head. He has also been charged in the 2010 murder of Nina Whitney in south Kansas City.

Moreland had been a suspect in the murder investigations and was asked for a DNA sample on June 16th and declined. Well, he provided one by raping the woman on June 30 and was subsequently linked to the homicides. He fled the area and was arrested on July 5th in Des Moines. Good luck in prison Jeff, I hear they enjoy former Police Officers in there! You're going to be real popular.
at 11:47 AM