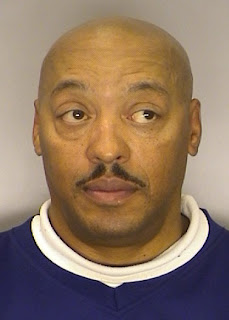 Take a look at this Dumb Fuck. Aaron Sullivan, 50, of Kansas City, has been arrested and charged with involuntary manslaughter and armed criminal action in the Fourth of July death of 11 year old Blair Lane. For those of you not following this story already, Blair was killed by a stray bullet while lighting fireworks in an east Kansas City neighborhood. The assumption was that some dumbass was celebrating the Fourth by shooting in the air like a West Virginia Hillbilly.

Four men admitted to taking turns firing the gun that investigators linked to the bullet that killed the little girl. The weapon was a 9mm Glock belonging to Sullivan. He turned the gun over to the police earlier this week for testing.

Grown men, fifty years old, firing a gun indiscriminately. Unbelievable. And why are they not charging the three other geniuses? Hopefully charges are pending on them as well. Sullivan is currently being held on $25,000 bond.

And WTF is he looking at in that mug shot? Is he already keeping an eye out for the prison rapists? Enjoy your time in the slammer, dipshit!
at 11:30 AM