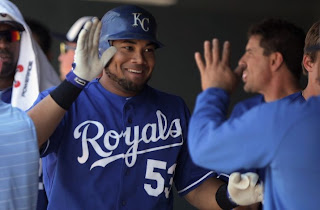 We might not have an NFL season, but the Royals were on the winning end of a football looking score today in Colorado. Kansas City's offense exploded late, giving the Royals a 16-8 victory over the Rockies.
Kansas City's offense put up staggering numbers this afternoon, which helped it overcome some poor pitching and defense. The Royals set a franchise record with 12 extra base hits, and Melky Cabrera enjoyed a monster game from the plate. Cabrera hit home runs in the first and third inning, giving Kansas City a quick 6-0 lead.
Colorado didn't go away quietly, however, and soon cut the lead to 6-5 with a huge fifth inning. The Royals quickly answered back, scoring six runs in the sixth and four runs in the seventh to put the game out of reach. Kansas City ended the day with 21 hits, a season high.
Kansas City will get back to its American League schedule tomorrow, when they travel to Chicago to take on the White Sox. Game one starts at 6:10 p.m., and Jeff Francis (3-9) will get the start for the Royals.
at 9:39 PM

Your blog provided us valuable information to work on. You have done a marvelous job!orange county ca defense lawyer