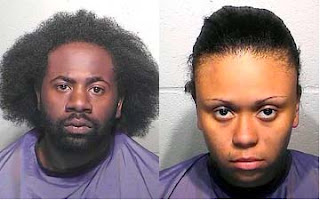 Vergal Clemmons and Crystal Slaughter were charged today with attempted first degree murder and aggravated robbery in connection to last week's shooting and robbery at a jewelry store in Shawnee, KS.  Although it took Lenexa's finest a couple of days to catch up with them, evidence from the Johnson County Crime Lab finally pointed the finger in the right direction.

Like an ebony version of Bonnie and Clyde, Vergal Clemmons and Crystal Slaughter  shot up the Jewelry Shoppe at 7753 Quivira Road on June 23rd while attempting to burglarize it.  Clemmons is a felon and was illegally in possession of a firearm during the robbery / shooting so he will be charged with that as well.  The 71 year old owner of the Jewelry Shoppe was shot during the robbery, but was taken to the hospital in stable condition.  Johnson County District Attorney Steve Howe said today that the charges against Clemmons and Slaughter were the result of an extensive investigation by the Lenexa Police Department and the Johnson County Crime Lab operative.
We interviewed a nearby resident who claimed that "Lenexa's finest had my entire neighborhood on lockdown, every time I would pull into my own neighborhood they were eyeballing me".  Anyone familiar with Lenexa knows that the police swarm constantly around the neighborhood and it is difficult to believe that anyone would be dense enough to attempt armed robbery in that jurisdiction.  Lenexa is one of those places in Kansas City where you really do need to go 35 mph when posted.
Not surprisingly, Vergal Clemmons is from Kansas City, Kansas, and his partner Crystal Slaughter was in fact a resident of Lenexa, this would lead us to believe that she had scoped out the place, then summoned the help of thug gangsta Clemmons to assist in shooting the 71 year old owner and robbing him blind.  Luckily, they failed miserably and bond has been set at $500,000 for Clemmons and at $250,000 for Slaughter.
How is it that in this day and age of cameras and advanced surveillance criminals still think that they can rob a bank, convenience store, or in this case a jewelry store?  Listen up people, if you are in a public place, you are most likely on camera whether you are aware of it or not.
at 4:45 PM