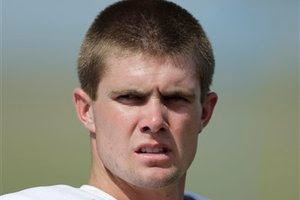 Bubba Starling and his family are nearing a decision on his future. We know that, because he has a deadline. The Royals have until Monday at Midnight to sign the two sport phenom or their draft pick is nullified. Starling has also signed a letter of intent and is enrolled a t the University of Nebraska. They want him to be their new starting Quarterback. Most likely Bubba could excel in either situation. Many, including his High School Coaches, say he is the best athelete they have ever seen.

I think it's an easy decision. Starling will play baseball for the Royals organization without a doubt. Bubba has agent Scott Boras on his team, and he knows what he is doing. This thing will go down to the last minute on Monday, and Starling (as well as Boras) will take the huge payday. We are talking in the $9-10 million neighborhood. Nobody turns down that kind of money to get pummeled by Linebackers for free.

Sure, the Royals suck, and probably always will, but if he gets to the Bigs and becomes the star everyone thinks he can be, all he has to do is play out his contract, become a Free Agent, make more money to play for a winner. This scenario has worked wonders for players over the years in the Royals organization. Besides, who would want to play for this group of dumb ass fans?