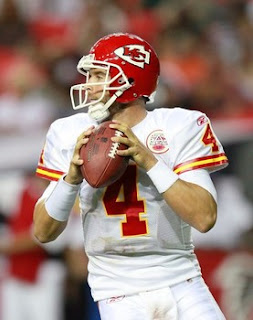 No surprises here, just as last year, The Kansas City Chiefs aren't going to give away any secrets during the preseason. Arrowhead filled up about half way on Friday night with fans eager to see the first NFL action since our playoff debacle last season vs. the Ravens. The pregame show was lackluster, with a rag-tag little tribute to the troops (done before often?), and then the torture began. Almost like a boxer taking a dive in the 1st round, The Kansas City Chiefs showed no signs of running any real plays, or even starting most of the top players that the fans came out to see. Matt Cassel, who the fans in our V.I.P. section have dubbed "the league's highest paid back up quarterback" didn't throw a single pass - not that Matt can exactly WOW us with his passing skill, but it would have been nice to see at least one ball get up into the air. No such luck, it was run for 1 yard, punt, watch the other team score, run for another 3 yards, fumble, watch the other team score, then...they took out the starters.

This is typical Chiefs preseason football under it's new leadership regime, and though last year's preseason shocked many Chiefs fans into a deep depression, this year we were ready. We know that coach Haley and Pioli have no intention of revealing any of the Chiefs real playbook to the public until the Chiefs home opener on September 11th, 2011. While other teams in the NFL took to the air and put up touchdowns and defensive sacks, the Chiefs gave all of their bench players ample playing time and seemed to have no game plan whatsoever. Which is fine!

One thing that was fun to watch was backup QB Tyler Palko's performance. There is something very unpredictable and exciting about the play of any left handed quarterback. Left handed people are more intelligent as a whole and much more crafty. Palko is ranked in the top 3 quarterbacks of all time at Pittsburgh where he attended college - another member of the top 3 at Pitt is none other than Dan Marino - and Palko finished only 254 yards behind Marino in passing yards at Pitt. On Friday night Palko gave an athletic performance, scrambling to buy time, and winging the ball with skill and purpose.