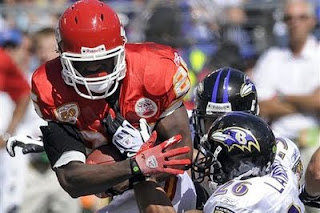 Well we definitely saw more action in week two of the Kansas City Chiefs preseason when they met up with the Baltimore Ravens, the team who ended the season for Kansas City last season. The Chiefs looked like they were poking their head out of the turtle shell of Haley's secrets just a tad more this week, and actually testing out some plays.

Just as many have predicted, it appears that the secret of Jamaal Charles is out of the bag and that every team facing the Chiefs this year will be keying on him. The football nation as a whole is WAY too excited about Jamaal Charles, and that's putting too much focus on him. For one example, fantasy league owners are choosing Charles an average of 4th pick overall and that is just rediculous. Charles is a great running back, but he is not going to be a secret any more, and since he doesn't exactly break tackles, he is going to have an uphill battle ahead of him in 2011. Fantasy owners who choose Charles in the first round are going to be sorry. In Friday night's game Charles stumped along for 12 yards on 4 carries, which is a much more realistic scenario of what is to come for the young running back.

Here at Kansas City News, we are still not sold on Matt Cassel, but at least he did get the ball into the air this week to go 6/14 with 73 yards. In our minds he is still a very highly paid back up quarterback. Tyler Palko made another great showing, going 8/13, 95 yards and a touchdown to Terrance Copper. This left handed gunslinger looks good to us, and he should be our number 2 guy.

Rookie Justin Houston had a great game with 2 sacks, honoring the #50 jersey that was worn by veteran Mike Vrabel. The defense continued to fall for the old short pass up the middle that is Baltimore's staple play, the same play they beat us over the head with over and over in last year's playoff game. The Chiefs defense needs to work on sealing up the middle or we're going to face real trouble when we meet teams with marquis running backs and shifty slot receivers. Other than that, the Chiefs starting defense did fairly well overall, matching blows with the Ravens starters all the way through the second half.

The Ravens left their starters in longer than the Chiefs and went on to win the game, but there is really no such thing as "winning" a preseason game, and I'm certain that Haley and Pioli do not care about the preseason scoreboard - and rightly so. The Chiefs came out with swagger and confidence and held their own against the Ravens, and that is a good sign of things to come.

Many Chiefs fans are looking forward for their game. And I'm one of them! So gotta buy my Kansas City Chiefs tickets! now!