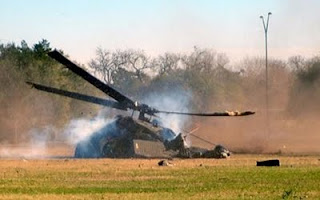 Federal Aviation Administration investigators sorted through the wreckage from the LifeNet Helicopter crash that happened at NE 146th Street and Cameron Road in Clay County near Mosby, Missouri. The medical helicopter deployed from St. Joseph crashed in a field at that intersection on it's way to Liberty Hospital. There were four people aboard and there were no survivors. The name of the patient being transported has not yet been released, but the medical staff and pilot included Randy Bever, Chris Frakes and James Freudenberg. The helicopter pilot, James Freudenberg was a well trained pilot and had served in Afghanistan prior to working for the Air Methods Corporation.

The helicopter was headed for Liberty Hospital when the pilot announced that they would have to stop at the Midwest National Airport in Mosby, Missouri for fuel. A spokesman for Air Methods Corporation, the company that employed the helicopter, said that it was not a usual procedure to re-fuel with a patient on board. The crash occurred about a mile away from the airport. Investigators from the National Transportation Safety Board have stated that they will not complete a full investigation for up to 12 months and at this time they don't know if the helicopter ran out of fuel or not. The LifeNet helicopter was a Eurocopter AS-350.