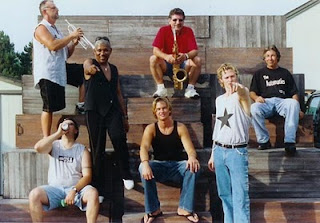 Several local Kansas City bands have amazing history and credits to their name. Today, 10 years after they broke up, we celebrate some of the accomplishments of one of the most powerful funk bands that has ever performed in Kansas City, The Automatics. Here are a few things that this amazing horn powered band accomplished in just a few short years:
The Tonight Show with Jay Leno - The Automatics (then called the BWB band) performed on the Tonight Show with Jay Leno
The White House - The Automatics have performed at The White House
Jerry Seinfeld - They opened for Jerry Seinfeld when he performed at Ceasar's Palace in Las Vegas, Nevada
ESPN - The Automatics were featured on ESPN as the headline act for the NCAA Championship game.
Kansas Speedway - The Automatics performed with Brooks and Dunn at the Kansas Speedway on stage together.
Dick Clark's American Bandstand - The Automatics performed for the walk of fame Dick Clark's American Bandstand
The Automatics were made up of the perfect combination of Kansas City musicians including Johnny C (guitar / vox), Randy Malone (saxophone / vox), Shawn Cassity (trumpet / vox), Brian Reynolds (drums / vox), Adam Blue (keys / vox), and last but certainly not least, Greg "Coko" Henderson (bass / vox). They played relentlessly and they played whatever the hell they wanted.
They played as loud as any touring band, and they partied their asses off in the process. If a venue owner tried to tell them to turn down, drummer Brian Reynolds would happily point to the large sticker on his bass drum which read "If It's Too Loud, You're Too OLD". But if it was a concert-like environment you wanted, The Automatics delivered; a horn section that would peel your face off, a bass player in Coko Henderson that would make any white person who played bass just want to quit playing the bass on the spot, and a combined attitude of "fuck off, we're going to play, and we're going to play really loud". They don't make bands like that any more, ever since the acoustic strumming hippie acts have hit Kansas City, but we can always hope that the style of the Automatics is replicated sometime in the near future, or then again, maybe a reunion concert? Ay boys? Here's a slideshow video of one of the Automatics unforgettable performances:
http://www.youtube.com/watch?v=nv_83ziBAiU
at 8:08 PM

The Automatics band in Kansas City were one of the greats. They performed from 1996 - 2003 approximately and they were so talented! They used to play for our city's festival and we really miss them.