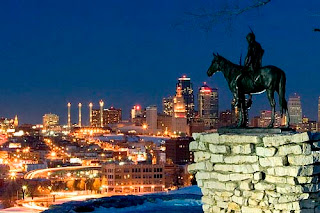 The American Royal BBQ 2011 - Kansas City News
The 2011 Contest and Kansas City event is under way this evening as over 100,000 people will pass through this year's American Royal BBQ 2011. Tickets are available to purchase at the gate but remember, just because you get into the event doesn't mean that you can get in to any of the parties and tents that are there. The tents and private areas are by invitation only, and are all just like small private parties. Some will have Kansas City DJs for entertainment, some will have live bands such as the Bayer Tent who will be featuring Spike Blake and Honky Tonk Rodeo. The American Royal will run through Sunday, October 2nd and will feature the "World Series of BBQ" contest. American Royal BBQ prizes are as follows:

For each of four categories:

Waldo Rapist Bernard Jackson Receives 18 Life Sentences - Kansas City News
It all started in 1977 when Bernard Jackson was convicted of his first rape at the age of 19. 6 years later, Jackson was released and he continued to torture, rob and rape women in the Waldo area until 1985 when Bernard was convicted of rape again and sentenced to 30 years. Jackson was then paroled in December of 2008, and was subsequently charged with additional rapes that occurred after his 2008 release. Bernard Jackson, a.k.a. the Waldo Rapist was sentenced today to 18 consecutive life sentences by assistant district attorney Ted Hunt for the rapes that Jackson committed back in the 1980's in light of new evidence that has been analyzed. Bernard Jackson's attorney, Carie Allen looked like some kind of bad joke today, her hair was fried out and she actually was seen laughing out loud several times during the case, yes, Carie, murder and rape are very funny topics, and your client is a ghetto stank piece of shit that belongs in jail - FOREVER.
at 4:21 PM