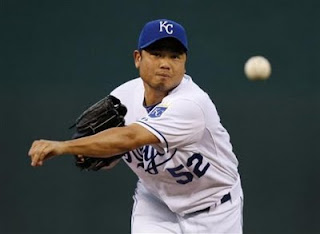 Hey wait a minute...it's not over yet! The Kansas City Royals are actually playing pretty well of late. Although they have no shot at the MLB Playoffs, it is still a good sign that they are playing as a team and putting up some wins. The Chiefs could take a lesson from the Royals at this point, as they are complimenting each other in the media, playing like a team and seem to have a really positive attitude right now.
Pitcher Bruce Chen, now 11-7, pitched a stellar game against the Minnesota Twins pitching for 8 innings and slapping them down 4 - 0. Chen was on the radio this morning really pumping up the Royals and how they have come together as a team and he goes on to describe the positive feeling around the ball club right now. Whatever they are feeding The Royals, can they please feed some to The Chiefs? The Chiefs are staring down an 0-2 start this weekend facing the somewhat overrated Detroit Lions on Sunday, it would be nice if Chen and some of the Royals players could show up to a Chiefs practice and give them some pointers on playing like a team - especially on defense. It's always good to have at least one Kansas City sports team playing well, so congratulations to the Royals on their recent victories. They are officially no longer in last place!
at 12:23 PM