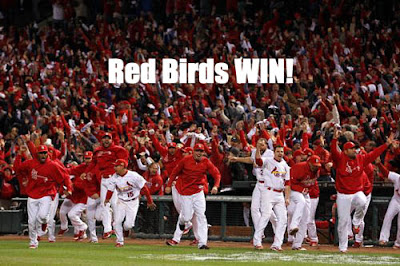 Red Birds WIN! The St. Louis Cardinals have defeated the Texas Rangers in the 2011 World Series. The Texans had several chances to close the door on the red birds, but the Cardinals hung on by a thread at home to eventually win game 6 and force a game 7 in which the Texas Rangers didn't even show up. The Cardinals didn't need the Rally Squirrel for game 7. The Rally Squirrel, by the way, now has his own Facebook page.

Game 6
Baseball critics and analysts alike are already calling game 6 a game of legendary proportions. The Cardinals trailed the Rangers for almost the entire game, all the way up until the 9th inning. With the score 7-5 Rangers in the bottom of the 9th inning, 2011 World Series hero David Freese hit a 2 run RBI triple to tie the game at 7-7. In the 10th inning the Rangers put up two more runs on a two run homer by Josh Hamilton, only to have the Lance Berkman tie the game again with an RBI single to make the score 9-9 after 10 innings. Inning number 11; enter the hometown hero, born and raised in St. Louis, Missouri, 3rd baseman David Freese steps up in the bottom of the 11th inning and gleeks the ball into the grassy knoll in straight away center field - WALK OFF HOME RUN!! Say goodnight Gracie, the Cardinals are heading to game 7 at home.

Game 7
In the World Series, a lot of the attention goes to the offense, the batters, the home run hitters, the base runners. But in the end, a great pitcher will eventually emerge, and silence the offense of the opposing team, and thus claiming the victory for his brothers. That pitcher was Chris Carpenter. Game seven was simply dominated by the Cardinals as the Texans couldn't produce any offense due to the extraordinary pitching by Chris Carpenter. Carpenter pitched seamlessly through 6 innings and one batter into the 7th, who hit a double. Although we questioned Cardinal manager Tony La Russa's decision to pull Carpenter, we cannot question the ways of the master. The Cardinals rallied behind their pitching staff sealed the win with a 6-2 World Series victory.
at 8:57 PM