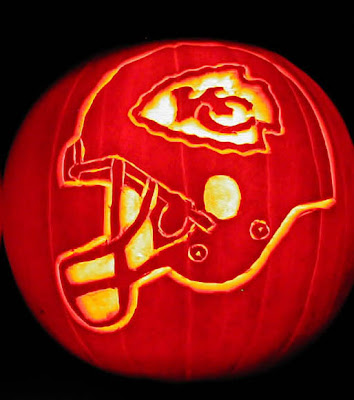 Halloween night at Arrowhead Stadium will feature a rivalry bout between the Kansas City Chiefs and the San Diego Chargers. The Chiefs have a chance to to share a piece of the lead in the AFC West if they can best the Chargers on Monday night football. The Chiefs defense has looked very strong of late and this game will be a battle to the finish. The Chargers offense, by contrast, has looked terrible lately with QB Philip Rivers barely able to complete a single pass. Brandon Flowers and the Chiefs secondary have been shredding opposing QBs with interceptions and pick six touchdown plays.

Arrowhead Stadium will be full of ghosts and ghouls as fans will dress up for Halloween, there will be live music by The Shanks and Almost Kiss, presented by Adam Blue Productions and lots of great tailgating. Tickets will probably be easy to find, however, as many parents will be taking their kids out trick or treating and missing the game. I doubt that many children are going to be talked out of going trick or treating to go to a Chiefs game. So here at Kansas City News we're predicting that it will be easy to purchase scalped tickets outside Arrowhead Stadium prior to the game.

The only monsters that Philip Rivers is going to see will be named Tamba Hali and Derrick Johnson as they mercilessly rush the pocket. If the defensive line can get penetration in the pocket it gives the Chiefs secondary a better shot at making plays on errant passes. The main concern for the Chiefs will be their offense. They will need Thomas Jones and Jackie Battle to step up and control this game with the run. We do not want to get into a "shoot out" situation with the Chargers, but rather keep the ball on the ground, run the clock and control the time of possession.
at 10:03 PM