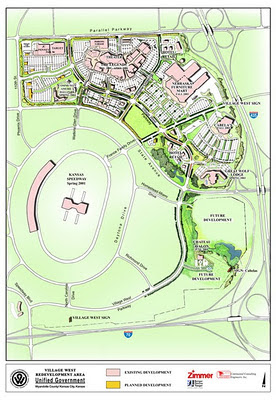 The shopping center in "the hood" located in the heart of the ghetto neighborhood of Kansas City, Kansas is having trouble keeping it's doors open. There wasn't much surprise that the Legends Shopping Center was having a hard time keeping up with other shopping centers located in more wealthy neighborhoods like Zona Rosa in the wealthy little nook of Briarcliff, Kansas City where they have tried very hard to recreate the lavish Leawood, Kansas and the Town Center Plaza Shopping Center located in Leawood. Although the Legends should get some help from the nearby Hollywood Casino that will be opening in February, it will still consist mostly of white trash people coming in from Cabella's (the store where they sell things to kill animals with), and of course the white trash mecca of the universe, Nebraska Furniture Mart. The Hollywood Casino will bring in a whole new group of rural country folk and the typical NASCAR fan, hillbilly types. In light of this, the chubby female staff at the Legends Shopping Center should consider catering towards the country folk, maybe a western wear store, a honky tonk bar with a mechanical bull, etc. Good stuff.

The company that holds the loan for The Legends shopping center said that they were going to "draw up a new loan plan for The Legends" in light of their recent loan default. Surely with the combined hillbilly draws of The Nebraska Furniture Mart, Cabella's, the NASCAR track, and finally the Hollywood Casino, The Legends Shopping Center should be able to get back on it's feet. Maybe that area should just go all the way and open up a large truck stop type motel and restaurant like Love's Truck Stop, that would put the icing on the white trash cake for that area.

We will keep you posted on The Legends Shopping Center in Kansas City and the state of their financial situation. As of now, since the center is being run by overweight women, it has been built to cater to overweight women, but if they can convert it to a rural hillbilly attraction I think that they will strike gold and get more business. Ooh! Maybe a new Silver Dollar City! Now that would be a great idea, it could be like the new Branson, Missouri out there - yeeeee-hawww!

You do not have to sign up to comment! If you have any trouble publishing your comment, try hitting the "Preview" button to publish from there. Thanks!
at 6:58 PM

Quote: "...shopping centers located in more wealthy neighborhoods like Zona Rosa in the wealthy little nook of Briarcliff, Kansas City where they have tried very hard to recreate the lavish Leawood, Kansas and the Town Center Plaza Shopping Center ..."

Either you've never been to either or one of them or you're lacking an attention to detail. You know... Facts a funny things.

Don't be a pussy. Put your name on the article so all those "white trash" people from Cabelas and NFM, as well as all those "ghetto" people who live around there, can come stomp your ass. Do you even live in KC? Or been to the Legends? Probably not, otherwise you would see that it's packed constantly. It's impossible to find a parking spot around there 4 or 5 nights a week. Do your research. You sound like an idiot.

This is a great piece on that area, it is right on the money. It is the white trash mecca of the city and with the new casino (who will no doubt advertise heavily in the small rural hillbilly towns in the Midwest) opening in February this place should go ahead and go "all in" and go country. Bring on the mechanical bull!