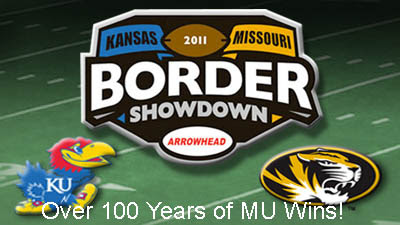 In the final Border War between the MU and KU football squads, it was no surprise that Mizzou was victorious over KU once again on a chilly Saturday afternoon on November 26th, 2011 at Arrowhead Stadium in Kansas City, Missouri. The Missouri Tigers effortlessly trampled the Kansas Jayhawks in a 24-10 victory to forever seal the vault on the Border War with a total victory record of 56-55-9 over KU since the Border War games started on October 31st, 1891. The MU / KU Border War was the longest living rival in football history, and it ended abruptly with the Mizzou victory on Saturday.

The reason that the Border War will cease to exist in the future is due to the recent announcement by Mizzou that it would be leaving the Big 12 for the SEC effective July 1st, 2012. KU fans were extremely upset with the decision by MU to leave the Big 12, and the city of Kansas City will certainly lose revenue with the loss of the annual game that would usually fill Arrowhead Stadium to capacity. In 2011, attendance was only 47,000 due to an absolutely pathetic KU football team, who only won a couple of games during the season and were expected to lose in embarrassing fashion to the dominating MU football team. MU fans showed up in droves and filled in their side of the stadium as usual, but KU fans pouted and decided to stay home instead of attend the game and be ruthlessly taunted by MU fans.

In 2012, Mizzou will move up to a better league in the SEC, and face more suitable rivals as KU was unable to provide much competition, losing the Border War series overall in the span of over 100 years. One reason that the MU / KU rivalry was so intense is that most KU fans live in the city of Overland Park, Kansas which directly "borders" the city of Kansas City, Missouri. Many bars would fill up along the border of the state line that divides Kansas and Missouri, where MU fans and KU fans would talk smack and taunt each other during the border war games, which almost always ended in an MU victory. This final Border War game was a great game overall, and ended a century-long rivalry between the Missouri Tigers and the perpetually over matched KU Jayhawks.

You do not have to sign up to comment! If you have any trouble publishing your comment, try hitting the "Preview" button to publish from there. Thanks!
at 7:09 PM

Congratulations Mizzou on beating KU for over 100 years! It's on to bigger and better things :)

Yes! Mizzou takes the entire 100 year series - that is awesome - sorry KU, maybe you guys can win in the next millennium, but I doubt it - hahahaha!