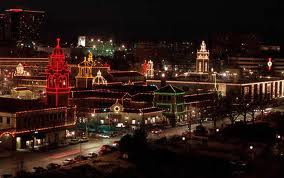 Whether you're ready for the holidays or not, they are upon us. Kansas City will be kicking off the festivities with the Plaza Lighting Ceremony 2011 on Thursday, November 24th at the Country Club Plaza.

The fun kicks off at 5:15pm with some pre-show entertainment from the same group of kids who performed last year. The lackluster "american idol / glee" style of performance was pretty lame and the only bright spot in the line up was the Dave Stephens Swing Orchestra who will unfortunately not be performing this year. The plaza lighting ceremony 2011 will be hosted by KSHB Chief Meteorologist Gary Lezak and his faithful dog Stormy. The actual switch to turn on the plaza lights will be thrown by Eric Stonestreet from the TV show "Modern Family" who is a Kansas City native who struck out to find fame in show business.

You do not have to sign up to comment! If you have any trouble publishing your comment, try hitting the "Preview" button to publish from there. Thanks!
at 1:43 PM

It is always such a relief when it's finally time to do the plaza lights ceremony! It means the beginning of Christmas and holiday celebrations in the great city of Kansas City.

the plaza lights are only 24 hours away! Happy Holidays everyone.

Can't wait to see the plaza lights come on this year!