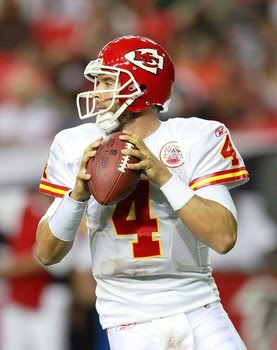 In his career with the Kansas City Chiefs, Tyler Palko has played in 4 games and thrown for 82 yards on 13 attempts with 0 touchdowns and 0 interceptions. Tyler Palko was drafted as an undrafted free agent in 2007 by the New Orleans Saints. Palko then signed with the Arizona Cardinals, and then the Pittsburgh Steelers before landing in Kansas City in 2010. Tyler Palko earned the position of 2nd string quarterback over rookie Ricky Stanzi during the 2011 preseason during which Palko proved to be the better man for the job. Palko was allowed to play the entire second half in the last game of the Chiefs preseason vs the Green Bay Packers. It is thought by many Chiefs fans that Palko earned the job of 2nd string quarterback through his knowledge of the playbook, as Ricky Stanzi is a rookie and has not mastered the system yet.

Palko will get his first NFL start on Monday Night Football vs the New England Patriots on November 21st, 2011. Although he is left handed, and thus more creative, he has yet to show this on the field. Many Chiefs fans agree that the change at quarterback from Matt Cassel to Tyler Palko is not going to impact the Chiefs performance as Cassel has been unsuccessful at leading the team thus far.
at 4:51 PM