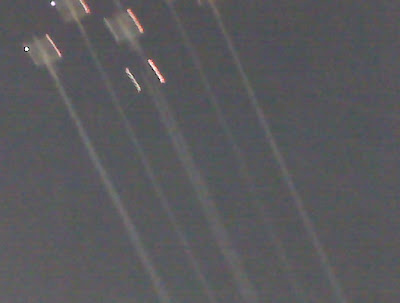 Thank you so much for all of your recent submissions for UFO sightings in Kansas City 2011, out of all of them, we liked the photo we received to the left of a UFO spotted and photographed in the area of highway 50 and 291 highway near Lee's Summit. It appears to be either one large craft with several lights and sections, or several small craft in formation. Either way this was a great photo of the UFO sighting, looks like they almost didn't get the camera out in time! We did not use any formatting on this photo - we left it as is.

UFO sightings in Kansas City increased exponentially in October 2011 with nearly 300 sightings reported in the Kansas City, Lee's Summit and Raytown areas in particular. Most sightings were reported between 6pm and 8pm, and there were several different types of UFOs spotted. We have had sightings of large, looming, dark craft that hovered hundreds of feet off the ground in plain sight just off the highway above traffic below, and then suddenly whoosh off into the night sky at speeds of over 500 miles per hour and completely disappear from sight. We have had UFO sightings that were comprised of several smaller craft flying in formation that had green lights and what might be described as yellowish "windows" on top flying right along a deserted road in the rural areas of Raytown.

Many UFO sightings were reported but the most by a landslide were reported in October. For some reason, the aliens decided to visit Kansas City in October this year. We're not sure what the correlation might be, but this October was hot with UFO sightings all around the KC area. In a previous UFO sightings in Kansas City report we noted that most of the sightings occurred between October 3rd and October 7th, and most of them near Lee's Summit, MO. We were actually on the phone with one couple who was traveling down 470 highway when they spotted a small formation of strange triangular aircraft, flying about 1000 feet in the air to the East of the highway, heading North toward downtown. The couple said that the craft were small triangles with blue and almost silver colored lights that blinked on and off in a pattern of sorts. After about 30 seconds in sight, the little triangles disappeared into the night in a blast of what they described as "light speed". This was on October 7th, 2011, at around 7:30pm, about the time that we decided that we had better start reporting these sightings in the news. Please keep your submissions of UFO sightings in Kansas City coming to us at kansascitynews@gmail.com and keep watching the skies!
at 8:06 PM