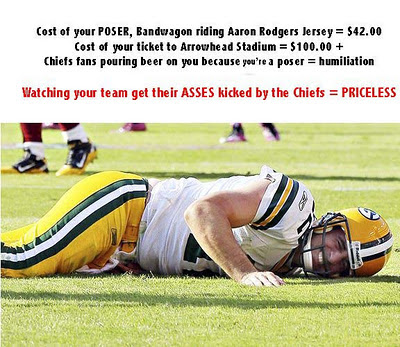 Cost of your POSER, BANDWAGON RIDING Aaron Rodgers jersey = $42.00
Tickets to Arrowhead today = $100.00 +
Getting beer poured on you by Chiefs fans who can kick your ass = humiliation
Watching your team get their ASSES KICKED by the CHIEFS = PRICELESS!
Sorry to all of you poser bandwagon Green Bay Packers fans out there, but your team officially sucks. The Chiefs ROUT the Packers today 19 - 14 in a game that revealed that the Packers are not even going to make it past round 1 in the playoffs. The Chiefs easily walked all over the Packers today as Romeo Crennel coached the Kansas City Chiefs to victory over the lucky and somehow undefeated Packers. The Chiefs ended the Packers win streak today. Done.
Once again, the Chiefs dominate on defense, stuffing Aaron Rodgers on every down. The Packers were unable to move the ball at all, and lost miserably at Arrowhead Stadium. The Chiefs started quarterback Kyle Orton, who got his first win as a Chief as he led the team to a seamless victory over the hapless Packers. The Chiefs hogged the game clock, keeping the ball in their possession for well over half of the game. Today was a great showing by the Chiefs offensive line, who up until today have been severely lacking. Kyle Orton was able to sit back in the pocket and complete passes to Steve Breaston, Dwayne Bowe, and added to a total of 438 total yards on offense. The Packers were pathetic for the entire game, and the spineless Packers fans who were in attendance at Arrowhead were stuffed and stifled early and often as the Chiefs marched right over them. Hopefully the Chiefs fans were pouring plenty of beer on the poser Packers fans as they watched their team get pummeled by the mighty Chiefs. This game reminded us of the Pittsburgh Steelers game a few years ago after they won the Super Bowl and they came into Arrowhead with all of the poser fans wearing Rothlesburger (don't care if we spelled his stupid name right or not - he's not even worth Googling to find out) and the Chiefs stomped the crap out of the Steelers that day.
Go home Packers fans, your team is officially done. But thanks for playing. And, you suck.
You do not have to sign up to comment! If you have any trouble publishing your comment, try hitting the "Preview" button to publish from there. Thanks you from Kansas City News!
at 3:07 PM

Chiefs stick Packers, priceless! You guys got it right in this article, the Packer fans that showed up at Arrowhead that day were the laughing stock of the stadium.

It's ok if you are a Packers fan and you show up to Arrowhead wearing a Favre jersey, or a Sterling Sharpe jersey - this shows that you are a long-time, dedicated REAL Packers fan. But if you showed up with a crispy brand new Rodgers jersey, you are a spineless, fake, pathetic person who deserved getting your asses kicked by the Chiefs. Packers suck - go home posers.