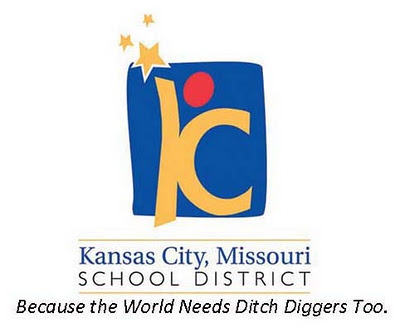 In a court hearing that many agree should not have been held in a Jackson County courtroom today, the 6 school districts who put in a petition to halt the transfer of students from the unaccredited Kansas City School district were denied today as Circuit Judge W. Brent Powell ruled against the temporary halt. Spokesmen from each of the six districts are expecting absolute chaos as thousands of inner city students and parents show up at their doorstep demanding to enroll their students in their accredited schools. The six schools who are expecting the worst at this point are The Center School District (we thought that this WAS a Kansas City School District), The Independence School District, The Blue Springs School District, The Raytown School District and The North Kansas City School District.
Let's just put up the main points in this situation to make it simple:
1. The Kansas City School District failed for a reason. The parents of the students in that district do not care enough about their children's education (the majority, that is - there are some exceptions so don't get all worked up). The fact is, the KC School District FAILED, it had it's chance, and it FAILED, so yes, we can say that the students are undereducated and that blame falls squarely on the parents who did not get involved.
2. The neighboring districts do not want an influx of students from the ghetto mixing in with their students. No one has said it, but believe me, THEY ARE THINKING IT. These students will bring an element of crime, thuggery and failure to these districts, which is not fair. These students couldn't make it work in their own district, so the answer is to abandon ship and go mess up another district? Not a good plan. Stay and fix your own problems. Can't wait to see the first urban mother on the news talking about how the neighboring school districts are "being racist" towards her children. Ah, the race card, it will definitely get played before this is all over. Race has nothing to do with the failure of your children and the society that you have created for them. Get over yourselves and fix your neighborhoods and schools and quit blaming everything on someone else. You got your president, now shut up and start doing some actual WORK.
3. The neighboring districts want their tuition PAID IN FULL, and PAID UP FRONT. It has been predicted by experts that most of these students who attempt to transfer will fail in the new school district and return or drop out within months or even weeks. The schools accepting new students have every right to demand their money up front so that they don't waste countless overhead and man hours preparing for these students, only to have them drop out when they can't keep up. The City of Kansas City wants to pay on a "month to month" basis, kind of like a low rent ghetto apartment complex or a sleazy hotel. That should tell you something right there.
4. The students and parents of the Kansas City School District DON'T NEED TO PANIC! It is ok for your kids to attend and graduate from an unaccredited school. They will still be able to get into the college of their choice on the merit of good SAT scores and academic history. If your student doesn't have a good academic history or cannot score well on the SAT, then they are going to fail anyway - a change of school district is not going to change that - sorry.
Just as a matter of easy transportation math, I would assume that the Center School District would be getting the worst of this influx of students. The Center School District lies closest to the Kansas City School District, and actually has a student body that would closely resemble the students who currently attend the Kansas City School District schools. Urban, low test scoring, police records, history of violence and bad parenting - the Center School District might actually be the best fit for the transferring students. But do they have enough room? Will the students who transfer lower Center School District's overall standing with the state as far as test scores, etc.?
Aside from the suburban school administrator's fears of large numbers of students trying to squeeze into their schools, there is, of course, a matter of money. The neighboring school districts have a policy in place that clearly states that a student wishing to transfer who does not reside in the the district boundaries must pay tuition (in North Kansas City's case around $9500.00), and the fee must be paid UP FRONT. The Kansas City School District has offered to pay around $3700.00 per student on a MONTHLY payment schedule. This is not satisfactory to the neighboring schools and is most likely a reflection on the City of Kansas City's lack of faith in the dropout rate of the students who will attempt to attend schools that are far advanced in education and curriculum, and most of the students who transfer will simply not be able to keep up and will either return to the Kansas City School District or simply drop out.
Here is a great quote from a teacher:
"What makes these school districts different is the level of parental and community support. What makes these schools different is that most of the parents are very involved in our children's lives and education and are actually parenting, raising our children to be productive, law abiding members of society."
And that, my friends sums it up pretty well.
You do not have to sign up to comment! If you have any trouble publishing your comment, try hitting the "Preview" button to publish from there. Thanks you from Kansas City News!
at 6:12 PM

Ah, so easy to point to "bigot" or "racist" instead of actually taking care of the problem at hand

NO LONGER AN EXCUSE TO BE A MINORITY - SORRY - it's just done.

I agree, there is no more racism, the blacks have just as much power as the whites now in government, jobs, etc. They need to get over the entitlement thing and move on. Making a statement that is a fact is not racism nor bigotry, it is what it is, it is a fact. Minorities need to move past using the race card and rise above all of this nonsense. As my mother always used to say, success is the greatest form of revenge.

Notable quotes from above

"Get over yourselves and fix your neighborhoods and schools and quit blaming everything on someone else. You got your president, now shut up and start doing some actual WORK." - inflammatory run on sentence

"I agree, there is no more racism" - You posted anonymous, but your name might as well be Norwegian Captain Planet, because you are neither living in reality, nor the United States.

Great quotes guys. Please keep them coming. Show your ignorance to the world!