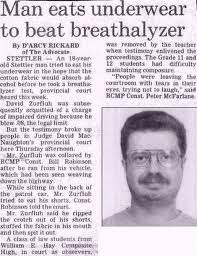 Be careful out there this weekend! Here at Kansas City News we would like to bring you up to speed on the DUI checkpoints in Kansas City for February 24th, 25th and 26th. Remember, there is a new casino that just opened by the Kansas Speedway called Hollywood Casino and they will be swarming all over that place so be careful driving anywhere out and around The Legends Shopping Center.
Checkpoints will also be lurking in the usual places including:
Anywhere along Southwest Trafficway or Southwest Boulevard - avoid those streets if possible, especially on Southwest Trafficway near the Penn Valley Community College (around 31st Street) and also near the Sunfresh in Westport.
Avoid Ward Parkway all together if possible if you are trying to rocket out of the Plaza area from a night of embibing. Ward Parkway will have DUI checkpoints set up in a number of different areas including the most popular areas which are on the 77th block and the 79th street intersection where Ward Parkway splits into Kansas.
Wornall Road is always a popular spot for DUI checkpoints and they usually set those up around the Waldo area, near 75th Street or 77th Street. Wornall also has surprise checkpoints around 93rd Street on that blind corner where if you are driving south towards the intersection of 95th and Wornall, BANG! - there they are and you won't see a thing. Sometimes the Kansas City Police have a motorcycle posted up on the side street of 93rd looking to see if anyone tries to turn around and avoid the trap.
The best idea, of course is to avoid drunk driving and take a cab or find a sober friend to drive, this way you don't have to worry about DUI checkpoints in Kansas City at all! Be careful out there this weekend (February 24th, 25th and 26th) and drive safe!
You do not have to sign up to comment! If you have any trouble publishing your comment, try hitting the "Preview" button to publish from there. Thanks you from Kansas City News!
at 5:25 PM

Right on Kansas City News! You guys were right, they had a dui checkpoint set up at 77th and Ward Parkway just like you said. I'll be sure and check this site out from now on.